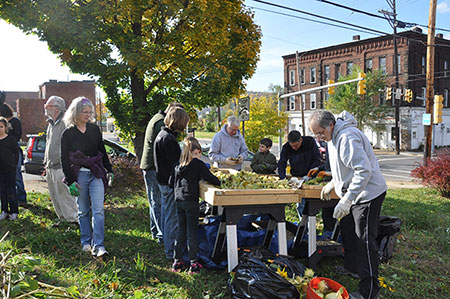 ‍‍The Dor Hadash Social Action Committee strives to embody the Jewish teaching “tzedek, tzedek tirdoff,” צדק צדק תרדוף, which means: “Justice, justice you shall pursue” (Deut. 16:20).
Judaism teaches that there are three major ways to pursue a more just and equitable society, Tzedakah (Charitable Giving), Avodah (Service) and Tikkun Olam (Repair of the World). We are dedicated to addressing all three over the course of each year. Certain projects are ongoing while others evolve in response to current events, partnership opportunities or the passions of our members.

We sponsor various tzedakah collection campaigns in the congregation and beyond.

We volunteer in the community with ongoing service in important communal organizations.

Tikkun Olam – Repair of the World

In light of the tragedy that Dor Hadash experienced on October 27, 2018, our committee focuses especially on two issues:

We are committed to partnering with Dor Hadash Religious School students whenever possible. We encourage and welcome others to join our Committee and to support our efforts. Commitments for a given activity are usually on a one time basis, although some SAC projects have a long “shelf life” and dedicated volunteers are essential to the program’s success. Notice of activities and requests for volunteers are sent out during weekly congregational emails. If you want to be sure of seeing the notice, would like to be a committee member, or hear about our work, please email the social action committee at socialaction@dorhadash.net.

Statement by Congregation Dor Hadash on the May 14, 2022 mass shooting in Buffalo, NY

The Congregation of Dor Hadash grieves for the victims of the horrific shooting in Buffalo, NY. For the families, we share your loss. For the Black community of upstate New York, we stand in solidarity with you during this awful time.

We call out the false virulently racist and antisemitic ‘Great Replacement’ conspiracy theory espoused by the white supremacist who targeted mostly Black victims, killing 10 and wounding three more. We have seen this before. This racist massacre is the most recent in a string of such attacks. These attacks are inspired by such fantasy conspiracy theories and enabled by the easy availability of firearms with massive destructive power. We remember the killing of nine Black parishioners at the Emanuel AME church in Charleston, SC in 2015, the murder of 11 of our fellow Jews at our synagogue in Pittsburgh in 2018, the murder of 51 Muslims at two mosques in ChristChurch, N.Z. in 2019, and the massacre of 23 largely Latino victims at a Walmart in El Paso, TX in 2019. The Great Replacement Theory has been cited by four mass shooters – including those who committed the massacres in Oslo, Norway; Christchurch, NZ; Dayton, OH; and El Paso, TX. Shockingly, nearly one in three Americans now believes this lie.

We must do more to fight back against the racist and antisemitic violence of the far right. We must call out white supremacism wherever it rears its ugly head. Whether online or by conspiracy theorists with platforms on major networks, such as Tucker Carlson’s program on Fox News, the pandering and enabling must stop. We must elect legislators - at all levels of government - who will fight against racism and unfounded conspiracy theories of white replacement. We must elect legislators who will pass common sense gun legislation supported by most Americans, to ensure that white supremacists do not have the means to carry out these horrific massacres.

Dor Hadash offers a lay-led, reconstructionist alternative. Join us on any Shabbat!

About the SchoolSchool GuideHolidays & EventsRegister